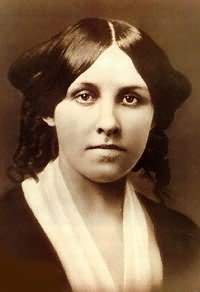 Now that I have submitted the first 10,000 words of my new novel to my agent I am back to my work on Writer’s Diaries by way of further brain stimulation. Like Virginia Woolf and Katherine Mansfield, Louisa May Alcott kept a diary throughout her life, and on its pages navigated her own split place in literary and familial history— as both the creator of dutiful daughters in The Little Women series and the pseudonymous author of sensational, subversive ‘thrillers.’ One major influence on Alcott’s writing life was her father, Bronson Alcott.  Bronson was, among other things, an educational reformer, and as Karen Haltunen argues in ‘The Domestic Drama of Louisa May Alcott’ ‘the impression that Bronson expected children to convey with their bodies was the perfect repose of their minds […] he required his young students to sit perfectly still, without fidgeting or whispering.’   From infancy, however, Louisa, ‘presented a major challenge to her father’s educational theories […] Louisa was demanding, noisy and even violent’ . Just as Mr March in Little Women sees anger as the sin that will halt Jo’s pilgrim’s progress, Bronson constantly instructed Louisa in calmness, stillness and patience.  And while the fictional Jo March’s boisterousness bristled beneath her calm exterior, so too did Louisa’s own stifled energies need to find expression.

Alcott found this release by secretly writing and publishing numerous sensation stories either anonymously or under the pseudonym AM Barnard. In tales with titles such as ‘Pauline’s Passion and Punishment’, ‘Doctor Dorn’s Revenge’ and ‘The Mysterious Mademoiselle,’ Alcott escaped from the morality tales for which she had become famous (and through which she single-handedly supported her family) by writing tales of passion, incest, revenge, drug addiction and murder.

Alcott once wrote that she’d rather be a ‘good daughter’ than a ‘great writer’ and the Little Women series compounds this image of Louisa as conforming like Jo March to the desires of her father.   In her pseudonymous thrillers, however, she avoided Bronson’s  policing gaze by writing not of feminine stillness, silence and governing one’s temper, but of powerful women with uncontrolled desires. Alcott’s journals offer enticing clues towards understanding this split-voiced fiction, as they witness the divide between her private desire and her public duty that was woven into fictions that seem otherwise irreconcilable: the passion, decadence and addictions of the characters in her thrillers are merely the dark reverse of the controlled and dutiful characters of her morality tales.

From the age of eleven to Alcott’s premature death at fifty, images of enclosure and intrusion (physical and moral) in the journals run alongside an anxious recital of financial wins and losses—in which none of her astounding successes ever silence her fear of not having enough to share. In an undated sketch of her childhood cited by Alcott’s first biographer, Ednah Cheney, Alcott noted that ‘[r]unning away was one of the delights of my early days; and I still enjoy sudden flights out of the nest. ’Louisa’s need for escape hints at the dynamics of their family structure and her relation to the moral surveillance of her father.